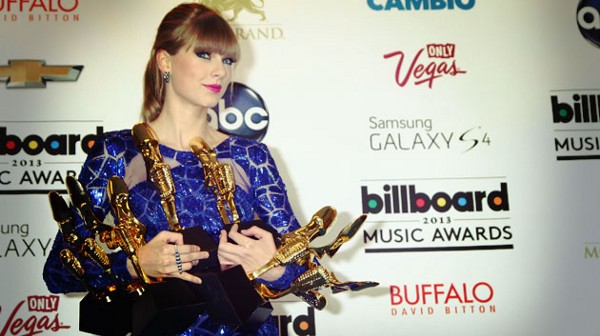 Unless you live under a rock, you know that Taylor Swift is kind of a big deal. Not since Eminem’s global domination of “The Eminem Show” in 2002 has a music artist sold more copies of a record in its first week. That’s more than a decade of declining music sales and album profits turned on its head with the release of “1989,” Swift’s new album. In its first week, “1989” sold 1.27 million units and is now going into its third straight week as a Billboard №1 record. This is unheard of in today’s music industry. “1989” is a record-breaking release, in an era where declining record sales, a downturn in iTunes purchases, and a competitive streaming market all but wrote off the Platinum-selling record altogether. Music writer and former Billboard magazine editor Bill Werde summed it up perfectly: “She is defying retail gravity.”

But for many fans of Swift, this doesn’t come as a surprise. She’s been quietly building up to this moment with a career that has consistently delivered her brand directly to audiences for more than a decade.

For any digital marketer, there is a lot to Swift’s approach that can inspire the direction for your brands. Here are six tips to consider.

Swift is a master of social media, from famously lecturing her record company about MySpace when she was 15 years old, to dominating Tumblr this year with her open and honest relationship with her fans. But it’s not just that she’s dedicated to these channels. It’s her tone. She feels so real, so authentic to her fans. Namely, she doesn’t act like the biggest pop star in the world. She acts like your best friend, someone who gets you, someone real who you can talk to. Marketers need to learn from this tone. On social media your brand needs to feel friendly and approachable. Brand equity is built through familiarity and trust — any MBA knows this is a tenet of brand growth. However, no brand has more consistently executed this than Swift.

Swift’s social media dominance is truly incredible. She has more than 47 million fans on Twitter alone. And she’s everywhere — Facebook, YouTube, Tumblr, Pinterest, Instagram, Vine, Line — she has every channel covered. But what Swift understands is that these are unique tools. Swift doesn’t broadcast the same post through all social media channels; She uses each one differently. On Twitter she’s running a #taylurking campaign where she is searching out fans tweets about her, and then featuring them and responding to them directly. But on Tumblr, she is asking fans for help in setting up and designing her blog and posting longer, in-depth musings.

Across every social channel she uses, she is astutely aware of how those channels should be used and how fans on those channels interact with each other. Her social media marketing is distinct, relevant, and just plain right in every place. Brands need to start recognizing that their one-size-fits-all social media approach is out of touch in this hyper-personalized, increasingly fractured, digital world.

It’s been difficult to escape recent news of Swift’s decision to remove her music from Spotify. As one of the largest music streaming offerings (and streaming being one of the only music channels to show signs of growth), her decision has sent shockwaves through the industry. But as Swift explained in her op-ed piece in The Wall Street Journal about the future of music (well ahead of her Spotify move), she says, “Music is art, and art is important and rare. Important, rare things are valuable. Valuable things should be paid for.”

Despite Swift’s dominance in almost every conceivable social media and music channel, she determined that some channels simply do not add value to her brand. In fact, she has implicitly discovered where her brand is being devalued and has managed it accordingly, like any good brand manager does. In the content-is-advertising era, this is a valuable lesson for digital marketers. We are creating short films, original music, webisode series, mobile games, and countless other forms of online entertainment surrounding our brands. But we’re giving it all away almost exclusively for free. We’re not placing any value on the art that surrounds our brands, and that is a mistake.

Great content, like our core products, is valuable, and we should consider how to amplify that value in our digital marketing.

Swift has come a long way since “Teardrops On My Guitar” from her 2006 debut album. But she has consistently inspired her fans in unexpected ways. With “1989” she made many decisions, most of which were against the advice of her record label. She started with a record cover that masked half her face — only showing her mouth and chin, understanding explicitly the mystery that it brought to the new record. With “Shake It Off,” the lead single from “1989,” Swift played on the conventions of music videos, playing the awkward “dork” in the midst of the trendy dance styles, and then brought in a group of fans to dance at the end of the video.

In the video for “Blank Space,” Swift surprised fans again, this time playing a revengeful, crazy jilted-lover, a distinct polarization of the Swift known to hash out her relationship troubles in brooding song lyrics, not crazy-girlfriend antics. And at the end of the video, she promotes an app companion, a “cinematic interactive musical experience” that allows fans to virtually explore the mansion and find secret objects. Marketers can learn from Swift’s self-awareness, and to play with the conventions of their brand. We could learn how to integrate consumers into our brands in more inspirational and unexpected ways.

With “1989,” Swift was positioned to make almost any brand partnership that could propel her record sales to the next level, including global emerging markets where she has room to grow. But Swift showed constraint with her partnerships. There was no U2 blunder with Apple iTunes, or a single sponsorship that overshadowed her product. But Swift made two key moves that helped build her brand and grow her audience. In one, she partnered with American Express to bring the American Express Unstaged Swift Blank Space Experience, giving fans everywhere a never-before-seen, 360-degree immersive music video experience. This unique digital content offering allowed Swift to bring a first, in digital, to the American Express Unstaged program.

Her partnership with NYC & Company, New York City’s official marketing and tourism organization, saw her take the role of Global Welcome Ambassador for the city, aligning her lead track off “1989,” “Welcome to New York,” with New York City’s official campaign for the city. Swift’s partnership connected her new album, officially, to arguably one of the most well-publicized cities in the world. New York City will be working with Swift to focus on digital channels in social media and video content for online.

Smart, strategic partnerships that perfectly align brand values are the goal of any digital partnership. Swift takes it to another level, and gets digital amplification that connects with her audience in new ways.

One thing Swift understands, and consistently delivers on, is maintaining the magic and the mystery in her brand. She knows that audiences today are motivated by the “surprise” in the relationship, as she puts it. Swift says: “In the YouTube generation we live in, I walked out onstage every night of my stadium tour last year knowing almost every fan had already seen the show online. My generation was raised being able to flip channels if we got bored, and we read the last page of the book when we got impatient. We want to be caught off guard, delighted, left in awe.”

But she also doesn’t show too much. She still keeps an air of mystery about her and maintains aspects of her strategy, career, and personal life behind locked doors, achieving a balance for her brand.

How are you bringing surprises into your brand relationship with your fans? What do you need to do to make your digital marketing fresh, new and interesting to your audience today — a tonal shift on social, a new surprising piece of video content, an unexpected fan contest? Make it magical and inspire your audience — and break records like Swift!