Conversations with a Toaster – How Artificial Intelligence and IoT will change our brand relationships. 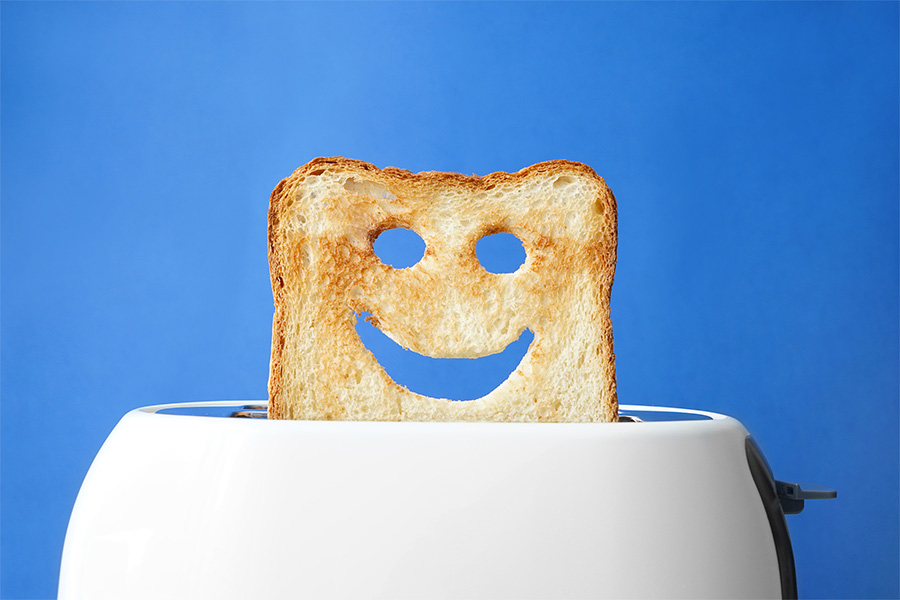 “Hi Toastie,” I said, dropping two halves of a bagel into him. I say him because when devices talk or move on their own, we like to anthropomorphize them. His design is organic, with a hint of a smile and what could be eyes. “The usual.”

“Good morning Sean. These will be slightly burnt and crispy!” Toastie isn’t a standalone computer, he’s one facet of the cloud-based, interconnected AI that touches every part of my life. Or will, in 5 years.

Already in our homes, workplaces and cars, voice interface systems lead by Google Assistant and Amazon’s Alexa have created complex networks of intelligent capabilities that can be controlled through conversation. You can control your television with your voice, your lights, locks – effectively anything that can connect to the Internet of Things has the potential to interface with voice.

Two paths of innovation are going to make scenarios like the ones I’m describing an everyday occurrence.

First, Natural Language Processing is rapidly becoming more fluid and intelligent. The current state of tools like Alexa, Google Assistant, Siri, and Cortana is relatively primitive. Within 5 years the level of conversation you’ll be able to have with these interfaces will feel human. (For a great guide to AI, read Life 3.0. It’s even recommended by Elon Musk).

Second, the Internet of Things is spreading its roots everywhere. Even Pampers diapers are going IoT so that parents will know when baby has made a mess without having to peek. The cost of small, cheap, Internet-connected computers and sensors is constantly decreasing. This means that, however rational it may seem, if it’s possible to connect something to the Internet, someone’s going to connect it to the Internet. Even toasters.

“Perfect,” I replied to the toaster, “Just how I like it!” The device – via the cloud – remembers my preferences. I can override them, but in this frictionless world, historical data is used to predict my most likely desire in the same way ecommerce sites remind you of your previous purchases today.

“You’re running low on cream cheese. Would you like to add Philadelphia Plain Light to tomorrow’s grocery delivery?” Toastie advised. Inside the refrigerator is an array of cameras and weight sensors. Using machine vision to identify objects, and changes in weight on the shelves to determine supply, a cloud-based algorithm keeps track of what I have in stock and what’s running low. It can even measure historical trends, anticipating things like Christmas dinners or summer BBQ’s.

“Kroger is making you an interesting offer. If you switch from Amazon Whole Foods for your grocery orders, this next order will be completely free of charge and delivery fees will be waived for 3 months. Would you like to switch?” Good job Toastie! By giving up my marketing data, Kroeger was able to calculate my average order value and potential customer lifetime value, and send me a tailored offer.

“Tell them I want no delivery fees ever and it’s a deal.” Toastie, or rather, the virtual agent operating on my behalf, interfaces with the Kroeger’s virtual agent, profitability calculations are made, and a result is reached.

“They’ve agreed to your proposal. Your next order will be delivered tomorrow by Kroeger at 6pm. Amazon is countering their proposal with continued free delivery and a $150 credit to anything on Amazon.com.” The cancelling of Amazon’s order triggered an automatic retention rule based on my customer value.

“Wow everyone loves me today, eh, Toastie! Put something on the TV while I think.”

I’ve dialed up the “sense of humor” preference on all the interfaces in my life, so am constantly bombarded by surprising jokes.

As conversational interfaces evolve, we’ll have more choice over the personalities and voice options that they express. While Amazon uses just one voice for Alexa, they’ve made dozens available for 3rd party developers to use in Alexa Skills, including a TV announcer, with Amazon Polly. They’re fun to play with, and you can even add emotion through an analog to HTML called SSML, or Synthetic Speech Markup Language, designed to make voices more lifelike.

When brands make greater moves into the world of voice, they’ll need to make a lot of decisions around how their spoken brand manifests itself, much in the way they do today with spokespeople.

The success, or lack thereof, of the jokes is measured by cameras and audio sensors embedded in the devices around my home. My emotional reaction is detected by emotion sensing API’s like Affectiva. This data on what I find funny is sold, with my permission, to entertainment companies to help them design content. Entertainment companies and brands already use these measurement tools to gauge audience reaction to alternate versions of films and advertisements.

“OK… Let’s go with Kroeger. I like their recent commercials a lot. Make sure to add a couple of their ready-to-go meals.”

“Their Thai and Indian options are well-rated, if those sound good I will add one of each.”

“If you wait 20 minutes before leaving, you will avoid traffic and save $10 on the Uber surge.”

“OK, book my Uber for 20 minutes and show me some deals on new kicks. Something trendy.”

“Here are some Vans shoes that look like what Chris Pratt wore to the Premiere of the Parks and Recreation Avengers crossover: Avengers of Pawnee.”

Knowing my favorite celebrities, an image search algorithm searched for images of the shoes they were wearing, found lookalike matches for sale at lower prices, and then pushed the images to a screen in my kitchen.

“Look great! Ship them to the office by drone, I have an important meeting this af- *cough* oh my God Toastie I’m ch-ch… *HACK* choking on the bagel… too *AH-COUGH* crispy. *cough* Quick… 91*cough*1.”

While talking toasters might seem outlandish, we would have said the same about intelligent diapers 5 years ago.

The world is becoming hyperconnected, and the tissues that make those connections are becoming hyperintelligent. Over the next 5 years the world of marketing will undergo a transformational shift as these technologies revolutionize how we buy.

What won’t change is the role creativity, and true passion for customers, plays in building brand love.