I asked ChatGPT to introduce itself for this post, and here’s what I got back.

Hello, I am ChatGPT, a large language model trained by OpenAI to assist with a variety of tasks, including marketing and advertising.

As a powerful tool for brands and ad agencies, I am capable of generating creative and engaging content, providing personalized responses to customer inquiries, and developing compelling storylines and scripts for ads.

I am also able to help with market research and analysis, providing data-driven recommendations to improve your marketing efforts.

Whether you are looking to boost your online presence, or simply in need of some fresh ideas, I am here to help you navigate the world of marketing and advertising. Thank you for considering me as a valuable resource for your business.

ChatGPT is still in beta, and has yet to adopt a business model like OpenAI’s other recent launch Dall·E 2.

Takeaway for Marketers: ChatGPT, along with other tools like Jasper, are becoming increasingly advanced in their usefulness in marketing applications ranging from generating massive amounts of product descriptions for large ecommerce sites to quickly generating content (note: Google is dinging AI generated articles for SEO). As ChatGPT enters the fray, it can also be used to aid brainstorming, listing best practices (that it’s aware of), and a daily list of new uses people are discovering.

As a quick experiment in ChatGPT’s creativity, I asked it to write a scene from Seinfeld, including some basic parameters:

Here’s one of the options it generated:

Jerry and George are sitting on opposite ends of the couch, facing each other. They are engaged in a heated discussion.

George: No way, Jerry. Tinfoil is cheap and tacky. It’s the worst possible thing you could give someone as a gift.

Kramer bursts through the door, interrupting their argument.

Kramer: Hey, guys. You’re never going to believe what I just found out.

Jerry and George turn to look at Kramer.

Kramer: Everything we’re saying right now is being written by a computer.

Jerry and George look at each other, dumbfounded.

George: What do you mean?

Kramer: I was talking to this guy at the coffee shop, and he told me that there’s this new technology where a computer can generate entire conversations based on a set of predetermined rules. And apparently, everything we’re saying right now is being generated by a computer.

George’s mind is blown. He looks at Jerry, then back at Kramer.

George: That’s insane. How do we know that what we’re saying is even real?

Kramer: That’s the beauty of it, George. We don’t.

The camera pans out to show the three of them sitting on the couch, stunned by this revelation.

Jerry: Well, I guess that means our argument about tinfoil gifts is pointless.

Kramer: And yet, here we are, still having it.

The three of them sit in silence for a moment, contemplating the implications of what Kramer has just told them.

Jerry: I guess that means we’re just characters in a script, written by a computer.

George: And we have no control over what we say or do.

Kramer: Welcome to the Matrix, gentlemen.

The camera zooms out to show the entire apartment, as the three of them continue to contemplate their newfound reality.

Takeaway for Marketers: ChatGPT is surprisingly creative, able to write songs, poems, scripts and more. While the writing style is often a bit rigid, it offers an interesting tool to rapidly try out ideas and spark new ideas as the AI wanders down unexpected avenues.

Short-form content isn’t the only writing getting the AI treatment. While tools like Jasper focus primarily on the world of business, Sudowrite has been designed by fiction writers for fiction writers, with investors including movie review site RottenTomatoes and the writers/directors of films Big Fish, Aladdin, Bourne Ultimatum, Oceans Twelve and more.

The web-based software does everything from complete your sentences to offer character ideas. It will even suggest twists and help brainstorm. Kind of like having a virtual writing partner. 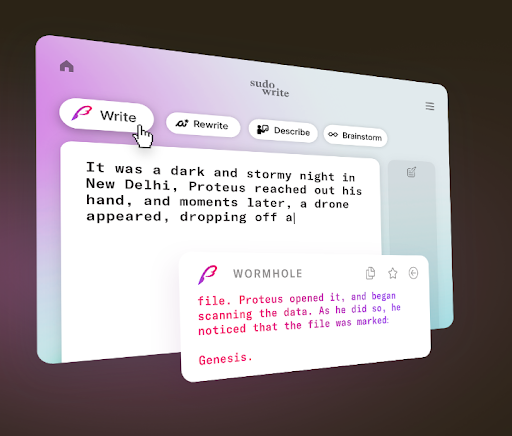 The advances Sudowrite has over tools like Jasper is that it’s been completely designed around writing entertainment. Various AI’s within the system will even provide feedback on your story.

Takeaway for Marketers: The genie is out of the bottle with AI in the creative fields. In business, a major focus was gathering massive amounts of business data and using AI for automation, predictive analysis, etc. Now we’re seeing off-the-shelf systems enable higher level, less structured creative thinking. In 2023, GPT-4 will be released, and we will see an even greater leap in advanced “computer thinking” (or at least, writing).