ESPN, Mothers, and a Shift in F1 Coverage

Formula 1 and Mothers car care were made for each other. Because F1 fans are the epitome of Mothers customers and precisely the target demographic, quintessential car enthusiasts. Passionate about speed and high-performance, inside and out. After ESPN picked up the rights to air live F1 racing coverage in 2017, SCS saw the opportunity to make Mothers a presenting sponsor of F1 coverage.

F1 races are long, live events without breaks or time-outs like other sports. Which means airing commercials is risking missing some possible race-defining action. Which, unfortunately, happened right when ESPN cut away to a Mothers commercial. Blowback was swift and significant, turning the network and our client immediately into targets for disappointed fans across social media. But with adversity—comes innovation. 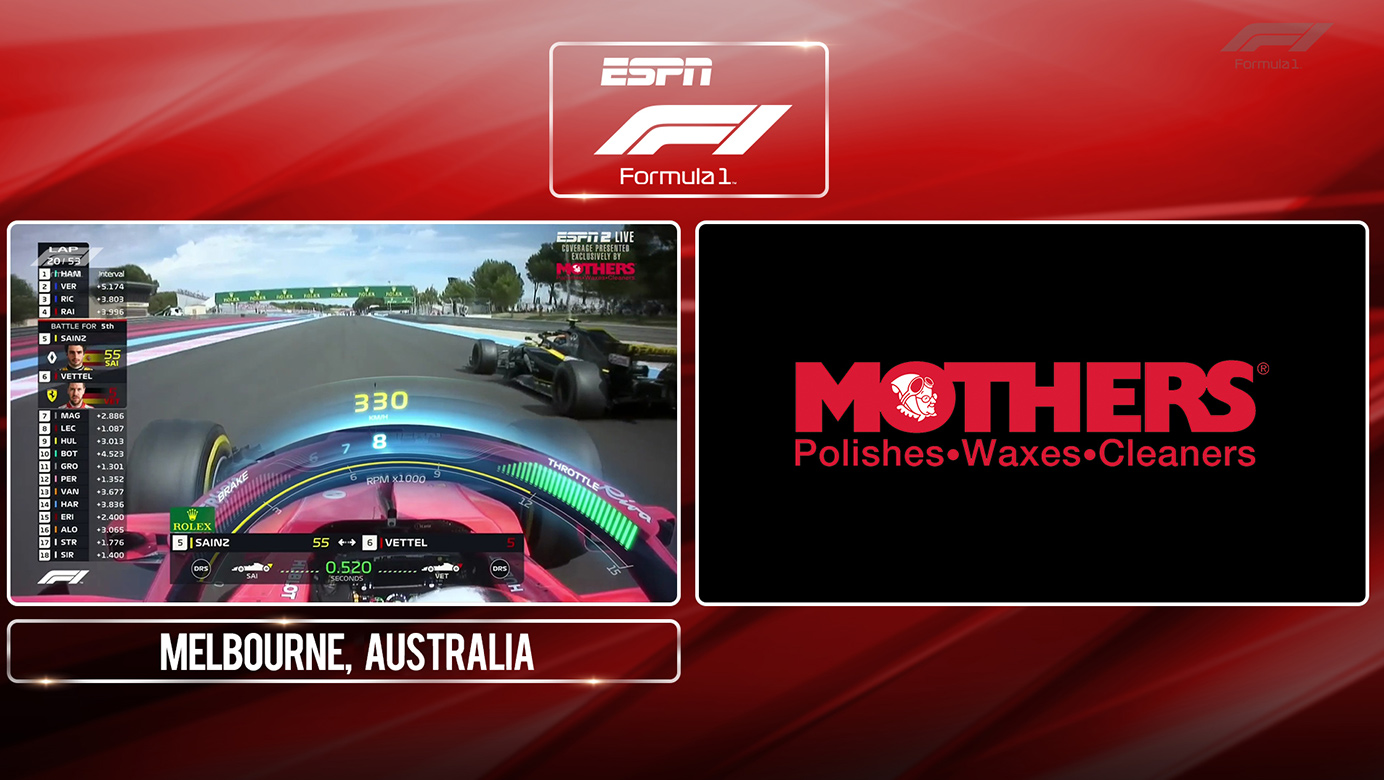 Working closely with ESPN, we found a fresh media solution that would keep F1 coverage running without missing a beat—and Mothers top of mind. All while fundamentally changing the way the network aired F1 coverage.

ESPN would make the F1 broadcast commercial-free with only one sponsor: Mothers. As the exclusive Presenting Sponsor, Mothers messaging would open and close each entire broadcast, and brand presentation messaging would appear on-screen throughout live coverage along with considerable additional promotional media support throughout the F1 season. Mothers received a full media partnership with a comprehensive integrated brand package while fans got uninterrupted coverage of the F1 season. Win-win. 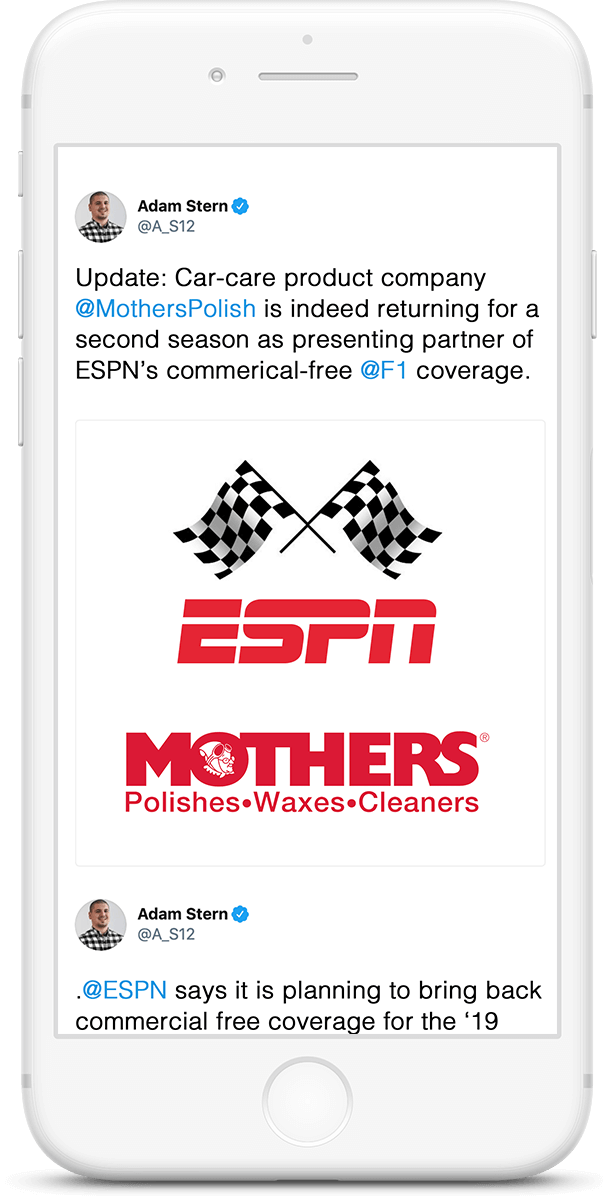 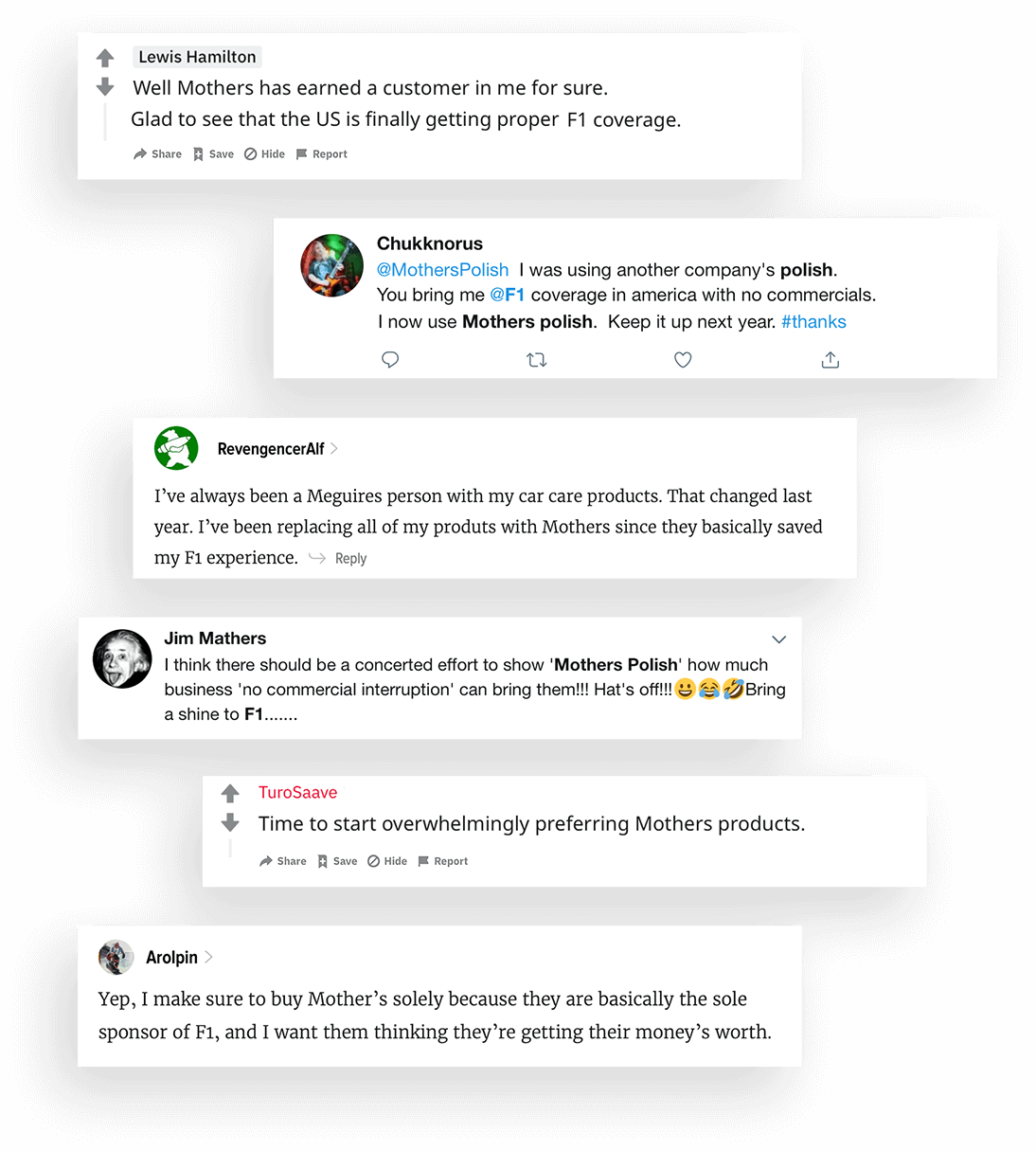 The response was immediate and explosively positive. Mothers received a total of +19.7M impressions for their key audiences over the 2019 season with an earned media value of 1.9MM. The Mothers-sponsored Bahrain Grand Prix captured the largest audience for an F1 race since 2012, averaging 682,914 viewers, and according to Nielsen Fast National data, the Mothers-sponsored Monaco Grand Prix earned the largest F1 audience on cable in two decades, averaging 809,000 viewers.

Fans were overjoyed. They sent handwritten letters, emails and took to social media to express their gratitude and loyalty. Forbes, USA Today, and countless auto blogs picked up the story, heaped on the praise while adding countless impressions. And ESPN’s year-over-year F1 viewership grew significantly.