Experiential Marketing in the New Normal

With events shut down, experiential marketing has been forced to adapt. Concerts moved to Fortnite, “bars” moved to Zoom and conferences were streamed. Even the experiential marketing behemoth SXSW, brought to you by White Claw, went online with the one-two punch of a digital event platform and streaming of content via video on demand apps to enjoy on TV. (You can read a bit more of our thinking on the rise of synthetic experiences here.)

But it’s not all been digital. Several major brands have modified their experiential marketing strategies to focus less on collective in-person or shared digital experience and more on the amplification of the experiences of a few.

A notable example, Walmart, has spent more of their media budget on experiential in 2020 than they ever have in the past. In October, they gave one family a socially-distanced Halloween experience they’d never forget, complete with tick-or-treating and a Jason Derulo concert that was amplified through social media. The brand also launched 140 contact-free Halloween and football events in their parking lots over the year, according to Retail Dive, as well as many farmers market-style events.

And some are focussing on experiences at home. In Canada, Little Caesars has responded to their inability to market to fans in arenas with a “micro” sports viewing strategy that cheekily involves consumers signing over naming rights to their living rooms and putting up signage in exchange for special perks and deals, including prizes in pizza boxes on selected hockey viewing nights. 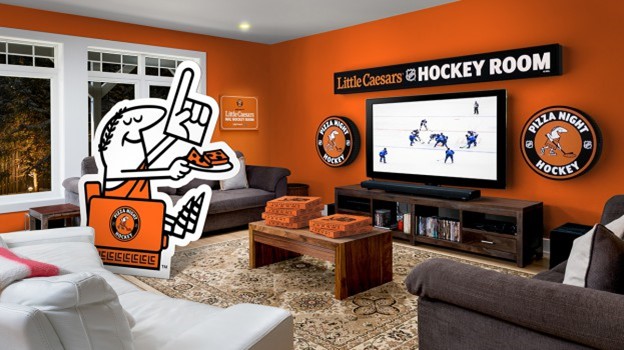 Experiential marketing has traditionally relied on live, shared experiences that humanize the brand and bring it to life in new, unexpected and memorable ways. We’re social animals, and live experiences leave an indelible mark. Now more than ever, people are craving in-person interaction and experiencing pandemic fatigue, responding by loosening their approach to staying at home. The number of Americans avoiding small gatherings declined by 40 points between April and the fall of 2020, and avoidance of public places declined by 25 points, according to Scientific American.

Despite the emergence of variants creating concern for new waves, there’s an increasing sense of optimism as the vaccine rollout gains steam, at least in the US, with the promise of 200 million doses delivered in the coming months.

Brands are beginning to signal hope around a return to a new normal where stadiums can once again be filled with fans, and concert festivals can deliver the energy and memories they once did, connecting them to brands in the process. The San Diego Comic-Con, for example, attended by 130,000 fans in recent years, just announced their live return will happen over the 2021 Thanksgiving weekend.

A recent vaccination PSA by the Advertising Council, with participation by the NFL, NHL and WWE among others, expresses this optimism for a return to sports:

Similarly, Guinness’ St. Patrick’s Day toast spot, featuring Joe Montana, calls out to “the comeback kid in all of us.”

The market is also anticipating a return to live events, while LiveNation, the parent company of TicketMaster, saw revenues decline 84% from 2019 to 2020, their stock reached a record high recently after a disastrous collapse in the middle of the pandemic as investors anticipate a return to live concerts. Fans, as well as artists, are clamouring to get back to normal.

“There are twice as many major touring artists on cycle in 2022 than a typical year – about 45 artists versus the usual 25,” notes LiveNation CEO Michael Rapino. “The supply-demand fundamentals of the concerts business remain strong, with artists ready to get back on the road and fans eager to reconnect at events. All our data continues to show that there is substantial pent-up demand for concerts on the consumer demand side.”

So what does a return to live experiences look like, and when will it happen?

Barring a new wave driven by variants, we’ll likely see it happen gradually over the late summer/early fall based on vaccination rates and existing new event bookings, with a focus on outdoor events preceding those indoors.

Recently in Spain, 5,000 fans rocked out at an actual, real-life concert. The catch? Everyone had to get tested right before. Fans had to wear masks, but social distancing was not required. Notably, the ticket price included the cost of testing, and attendees received a notification if they could enter the venue via an app on their phones, with positive attendees getting a refund. As the US Government looks to develop a vaccination “passport” it’s not hard to imagine live events requiring some type of proof that an attendee is either vaccinated or Covid-free.

In Australia, a live outdoor event recently had attendees cordoned off in “social pods” of 10 people each. One can imagine in the case of a festival that a marked grid is created, in which friends are able to stay in their smaller circle in their own space while still collectively enjoying the experience with a large crowd.

We’ve all gotten used to digital events, and while consumers want to go back to normal, the partial shift to digital is likely here to stay. As companies like LiveNation and conference organizers have built up their digital capacity, we’ll likely see a new hybrid model of live and digital events, similar to the simultaneous theater-streaming release of new movies, that help amplify live experiences with digital content.

We look forward to seeing you in real life soon!