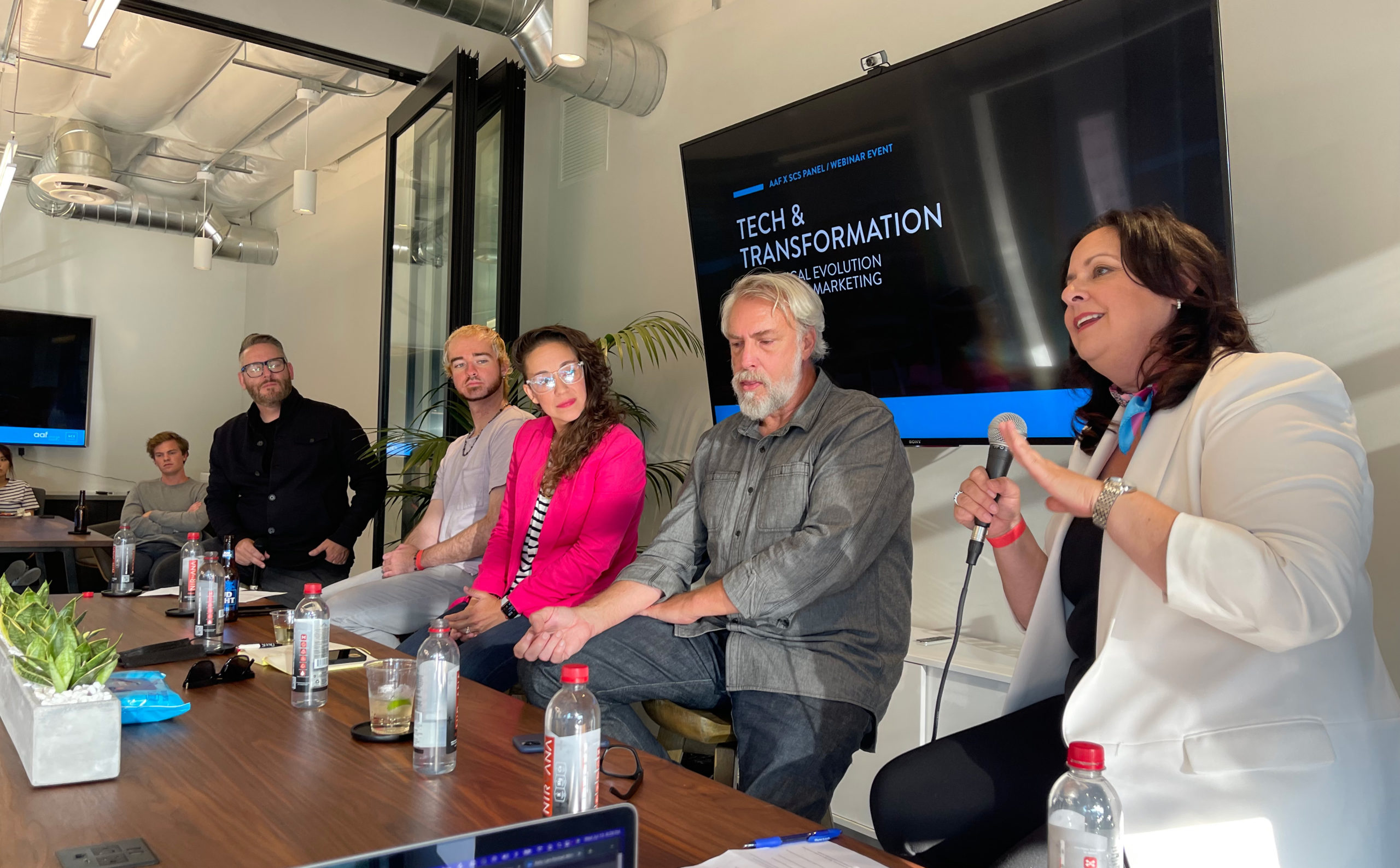 Gen Z can be skeptical of the blue sky promises of technology. We were born into a time of great transition, have grown up amidst its growing pains, and now are becoming adults when a great transition is again occurring. Although my generation is not defined by emerging technologies, I feel as though we are enmeshed in the great paradigm shift towards greater digital immersion, and many of us want to ensure that our participation in this shift creates a better world than the one we live in now. As an intern at SCS and a Gen Z creative, the Tech & Transformation event with Orange County’s advertising leaders gave me hope for the future. I was encouraged by how these marketing experts are not shying away from the unknown but are taking advantage of the opportunity to create positive change. Through collaboration, taking advantage of the opportunity to fail, and using data to make people’s lives better, we can use emerging technologies to create the future we want instead of passively watching it arrive.

The future of creativity is collaborative

When Courtney Betley, Creative Director at INNOCEAN, asked if anyone in the audience had been to Vidcon, only a few people showed any signs of recognition. Maybe if there had been more Gen Zers in the audience… but then again, I haven’t been either, so I digress. “Go to Vidcon,” Betley emphasized, “it will change your life, it literally is the future of a lot of these social spaces.” It was encouraging to see older generations embracing the use of influencers in branding.  “We’re taking the control away from the creative and we’re putting it into the creator,” said Chris Degenaars, President of Giant Bicycle and a proud Gen Zer. It’s a mark of how creativity is changing; it’s no longer a lone artist at an easel but a collaborative effort across the digital landscape. The panelists mutually acknowledged how much influencers are changing marketing because Gen Z isn’t influenced as much by ads, but by the people around them. “You can say that’s not your audience today,” said Degenaars, “but tomorrow it will be. If you’re not connecting with them now, you’re going to miss that opportunity.”

Take advantage of the opportunity to fail

The buzz around the metaverse and AI is steadily growing louder, but for the general public it remains very much of a mystery. Encounters with the unknown can bring fear of becoming an apocalyptic society with no human connection. But in my opinion, wherever creativity thrives, genuine connection will too. Creativity breeds collaboration and communication, so the question is, how will the use of AI affect that process? “It’s your new brushes, it’s your new pixels, you know, have a ball with it,” says John Zegowitz, Chief Creative Officer at SCS. He went on to emphasize how small the metaverse is right now; it’s just getting started, so now is the opportunity to learn. “Go in there and fail. Fail your brains out. Just go ahead and trip over your own shoelaces as much as you want because that’s where the education’s going to start coming from, that’s where we’re really going to learn what people are interested in,” Zegowitz said.

In the face of economic recession, there is uncertainty: from brands about collaborative creativity, from the public about the metaverse and AI, and from consumers about how data is being used to target them. One of the most enlightening parts of this panel was hearing a marketer’s perspective on how data can be used for good. Ana Amman, Senior Brand Storyteller at SAP, gave a message full of hope and excitement about the plethora of data brands now have access to. She’s excited about how personal brands can get, and how much more they can know who they’re marketing to. “We now, with technology, have the ability to market to an audience of one,” Amman said, “We also have an obligation to them. The flipside is, they need to continue to trust us.” Over the past few years, consumers have become much more aware of the concept of data privacy, and with that has come a general distrust towards those who use data. Ammann’s call to action emphasized that in the midst of everything going on in the world right now, “people are at a place where they want to be good. They want to find those brands that speak to their values, their purpose, their priorities, and their passions. So we need to make it easy for them to find us. We need to find our tribes.” Data can be used to help create communities, to bring people back together, and to inspire them to tap into the creativity that exists inside all of us.